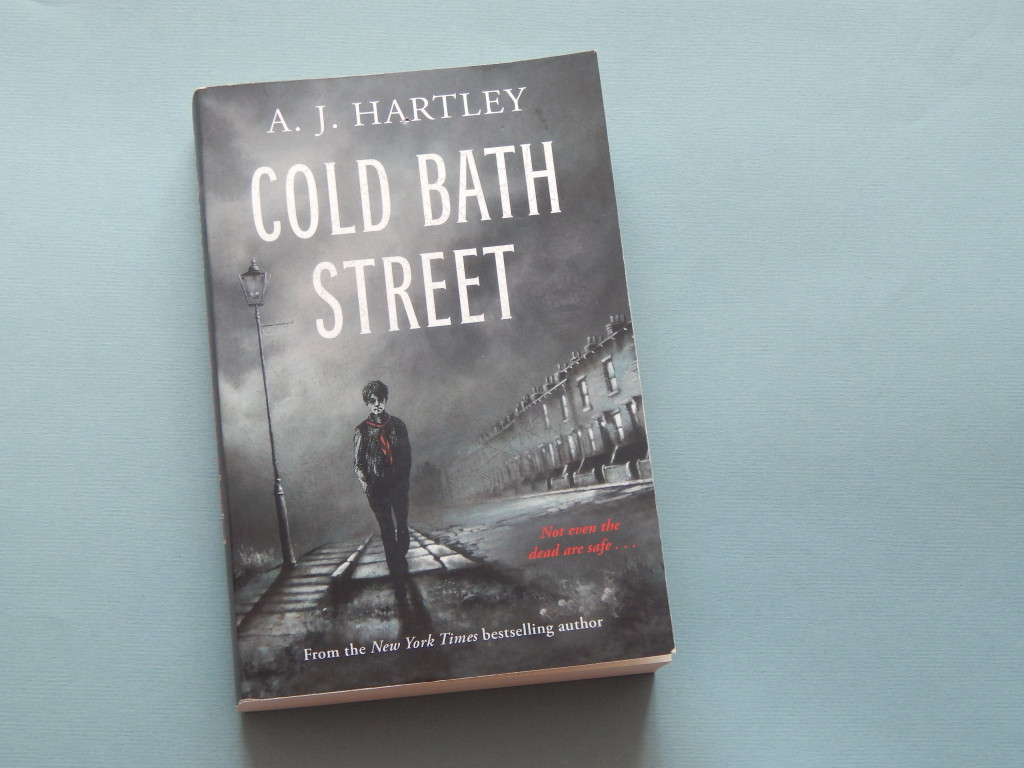 Today I have a fab post for you! The lovely folk behind The Northern YA Literary Festival got in touch about a great new book. They sent a copy of Cold Bath Street to me so that I could check it out and I really, really enjoyed it. So much so that I had a million and one questions for the author. I managed to narrow it down to just 7 which A.J. Hartley has been kind enough to answer for you all today!

First of all, Cold Bath Street is seriously creepy and unsettling. Did you always know that you wanted to write a ghost story?

It’s funny, because my instinctive answer was ‘no,’ since I have been writing long fiction for a long time and this my first ghost story, BUT I’m suddenly struck by a distinctive memory. I was maybe 12, and we were on a school (or possibly scouts?) visit to Underley Hall in Cumbria. I remember the whole group of us sitting in a large dining room. It was late enough that the windows were dark, but we were all stull up and taking it in turn to tell jokes and stories, teachers/supervisors and students together. I could be pretty shy in those days, still am in some ways, but I remember telling ghost stories to the whole room. I think they were things I’d got out of books (there was one about 50 Berkley Square in London), though I probably embroidered them a bit. The night sticks out in my memory because I remember people listening very attentively, and that the room was utterly silent. I’m probably making the whole thing sound cooler than it really was, but I know that it was one of the first moments when I thought I wanted to tell stories for a living.

I’ve always enjoyed reading ghost stories and I tried writing a short story about a haunted house from the perspective of the ghost when I was an undergraduate, but I’d never attempted anything like it in a novel till CBS. The atmospherics of ghost stories are what appeals to me, much more so than more conventionally realist horror.

Preston is a fantastic character. What was your inspiration for him?

That’s easy. He’s me, or rather he’s the way I remember myself at that age, made cooler and more sure of himself, of course. I wasn’t a very interesting kid and didn’t have Preston’s unwavering sense of self, or an ounce of his courage, but other than that…

Reading Cold Bath Street it is clear that the setting is paramount – was this a deliberate decision?

Absolutely. I wanted to write the place as I remembered it, as it defined my world and that of the character. That sense of the world coming to an unchanging halt at the moment of his death is a but like how I think of the town now, stuck in the era it was when I lived there. I think place shapes people more than they realize, and I wanted to make that literally true in this book. That’s also why he has the same name as the town.

Cold Bath Street doesn’t shy away from some harrowing things. How was it writing such scenes? Did you ever need to sleep with the light on?

Ha. Not really. I think writing effective scenes often requires a certain emotional distance from the material so that you can focus on the nuts and bolts of how you are trying to guide the thoughts and feelings of the reader. That said, I grew up on scary books and movies as well as on those ghost stories and legends in the book, so a lot of what I was writing came straight from memory, and I used to be pretty easily frightened. The Prologue’s account of the walk home from scouts, Preston’s awareness of where the darkest trees were, his sense of the brooding cemetery gates… all of that was just how I used to feel all the time.

I loved the illustrations in your novel. How did they come about?

They were the publisher’s idea. I jumped at the opportunity and had a lot of fun sorting through some of the sample work which different artists submitted in search of what would fit the tonality of the story. I think we got very lucky with Janet’s work which is nicely evocative and doesn’t try to show too much.

One of my favourite thing about this novel is the importance it puts on local myths and legends – that must have been fun to write? How did you know which legends to focus on?

Mostly they were the ones I remembered. Then I started poking around in local history and folklore trying to flesh them out a bit and see where and when they originated. Because ghost stories are mostly passed on by word of mouth they tend to shift and some slide into urban legends of the kind you can find in lots of places. I wanted to trace as best I could the oldest versions of the stories and weave them into the physical landscape of the town as a kind of spectral map.

(Bonus question since I love all legends: do you have a favourite myth/legend/fable outside of Preston?)

I lived in Japan for a couple of years and there are some great ones there. I especially like the stories of shape shifting tricksters (mostly foxes and a raccoon like creature called a tanuki) which take human forms to mislead people, or female ghosts who seduce overly amorous men and then terrorize them. Great, elemental stuff!

And there you have it! If you fancy reading Cold Bath Street, I would definitely recommend picking it up! Don’t forget that The Northern YA Literary Festival are hosting a brilliant event on The Supernatural and Fantastical in YA on the 21st July. For more information, check out their twitter page here.

One thought on “A Q&A with A. J. Hartley, author of Cold Bath Street”