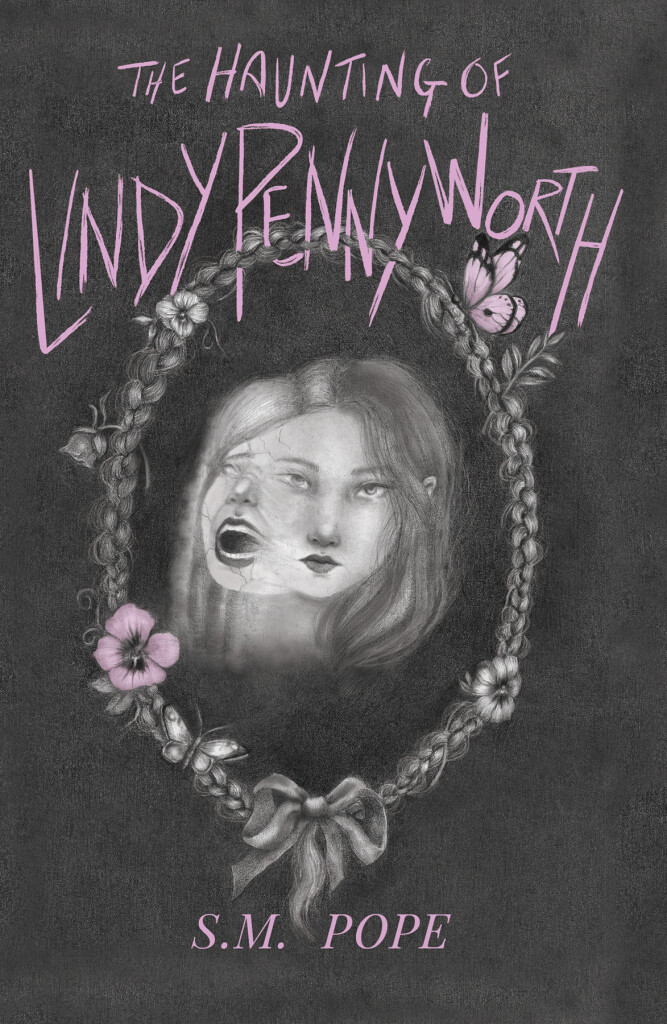 Hello and welcome back! I have another author interview for you today. As a reader and writer myself, I am loving reading these interviews so I hope you are too. It is so fascinating to see the process behind other people’s books!

Today, I am talking to Sam Pope, the author of The Haunting of Lindy Pennyworth.

Hello and welcome to This Northern Gal! Would you like to introduce yourself?

Hi there! Lovely to be with you on your fantastic blog. I’m Sam (Samantha!) Pope, and I am a writer based in Oxford. I’ve lived here for a couple of decades but before that, I lived in Devon and in Canada, where I was born. I also had a year in Spain. I love writing and reading supernatural stories but bizarrely, as a day job, I work as a primary-school librarian and read lots of love, comforting things, too. I teach Literature and Spanish, and I do some editing, too. I always love to be learning and, during lockdown, I tried my hand at art, having been told by an evil teacher years ago that I was hopeless. I might be – but it’s lovely to lose myself for a few hours doing some painting!

And what about your new book? Tell us all about The Haunting of Lindy Pennyworth please!

Ah, a labour of love! This story started life as my creative dissertation for my MA in Children’s Literature at the University of Roehampton. I knew I wanted to write a scary story but originally I also wanted it to be funny. I soon discovered that this was a very difficult task indeed. Jonathan Stroud does it brilliantly in his Lockwood & Co series, which I recommend to everyone – whether they’re a child or adult. Humour and horror can go together but the balance has to be right or one cancels out the other.

Anyway, I originally started writing this as a middle-grade book but it was ultimately dissatisfying. It wasn’t scary enough – it couldn’t be too scary for the readership. I went to a brilliant exhibition at the British Library on the Gothic Imagination and made my mind up then and there that it had to be young adult so I could explore more terrifying territory.

The story is basically this: Lindy Pennyworth is struggling to deal with the death of her father. The last thing they did before he died was argue, and she feels she can only move on if she can tell him how sorry she is and how much she loves him. She tries some spiritual DIY – tarot cards, Ouija boards, etc, but nothing happens. Then, one night after an incident in a local spiritualist church, the dead come calling … or do they?

Oh now that sounds intriguing! What drew you to the character of Lindy? She certainly sounds fascinating (and far braver than me)!

I think the hardest aspect of writing the novel was nailing Lindy’s character. At first, she was a meeker teen, but then when I started writing her, I found she had an attitude. I wasn’t sure how I felt about it. I played around with narrative viewpoint to see if it made a difference – trying to write her in the first person, then in the third person. At one point, she was mute, and couldn’t talk to people – that was submitted in my MA version. That was a mistake – I regret that because she was too much of a victim.

Eventually I settled on the version you have now. She used to be sparky, funny, with a bit of an attitude, but her father’s death has emotionally weakened her. She pulls out her hair to try to contain her grief – a form of self-harm that she discovered accidentally. At one point, I ditched that element because various people told me that it would put readers off. My editorial team at UCLan insisted it go back in and I am glad that they did.

Anyway, if any adjective can describe Lindy, it’s determined and I think it’s her best attribute. She was determined to make me understand her, after all!

I love a determined main character! What inspired you to write horror?

It’s funny because when I hear my book described as ‘horror’ I can’t quite believe it because horror makes me think of slasher moves – blood and gore. I hate films like that. But then I realised horror can be psychological – it can play games with your mind without resorting to violence. I find that horror helps me explore feelings of fear behind a safety net.

They say that that is why fairy stories are important developmentally for children – the brief fear they experience while reading those helps them process fear in a way that is a step removed so their own existence isn’t in jeopardy. I think it’s the same for me and horror. I have battled anxiety for the best part of my life and it’s not much fun. Horror in some ways gives my fear an outlet.

I had never thought about it like that but I can see exactly what you mean. A little Twitter search told me that you love gothic literature. It’s one of my favourite genres but if you had to pick one gothic text to recommend to someone who had never read any, what would you choose?

Oh, wow. This is a difficult one. Can I have one old one and one modern? I say that because my choice for an older book would be Mary Shelley’s Frankenstein. It’s amazing – clever, scary, brutal. And to think she was only eighteen. It’s a brilliant piece of work and genuinely frightening but also moving.

However, I know some younger readers now dislike it because it feels too old, wordy, etc. A shame. Therefore, I would recommend Michelle Paver’s Dark Matter which terrified me. One of the key things you have to get right in horror is for the reader never to quite know what is happening and whether it’s true or not. Add to that the permanent Arctic night, isolation, lack of communication and it’s a recipe for true fear.

Frankenstein is one of my favourite books and go to recommendations too. Will readers notice any gothic influence in The Haunting of Lindy Pennyworth?

I really hope so even though it takes place in the modern day, in a terraced house. The house is Victorian, and it is essential to the unfolding of events, in a similar way to how castles and curses, for example, are essential in traditional Gothic novels. Lindy has to break a curse and that is also a Gothic motif. Supernatural and inexplicable events are key to good Gothic stories, and there are plenty of episodes of those! Also, some people might say this is sexist, but traditional Gothic stories feature a heroine in distress or in a state of high emotion – that’s Lindy. I must say I would love to turn that characteristic of Gothic fiction on its head and have a man who is haunted. Perhaps in a later story …

Give it a go! You are a writer, editor, teacher and children’s librarian. How do you balance these careers?

Luckily, they all sort of intertwine. I started my career as an editor and writer in my early twenties, working on non-fiction titles, and writing the occasional piece for a now defunct magazine called New Woman (like Cosmo but more tongue in cheek). Working as an editor has helped train me to view my own writing more brutally – though it’s always tricky to kill your darlings, as they say.

Anyway, I work three days a week in a school library, then on the other two days, I do editorial work for other people. And then I fit my own writing around that. It’s hard – sometimes when I’ve been around words all day the last thing I want to do is start on them when I get home. I am not always successful. During lockdown, I found I couldn’t read anything at first or write. But then, earlier this year, I found inspiration for my next story and I’ve been reading and making notes constantly ever since.

I found my attitude to reading and writing changed massively in lockdown too. What is your writing process like? Do you have any set habits or procedures?

I wish I did but I don’t. I tend to write in bursts, once I have decided on my idea (and that can take the longest out of anything). I can go days without writing anything and then, suddenly, I will sit and write several thousand words reasonably quickly. Many of them are then culled but I find it helpful to just let them get out there and marinade for a while before I return to refine them.

My current project requires a lot of research, so I am finding for the first time that most of my spare hours are occupied with reading, highlighting and note-taking. I tend to set aside time in the evenings for this. Evenings generally work better for me when I write. I find my mind is more relaxed then, rather than overly critical.

I’m the complete opposite. My brain works best on a morning! What is next for you and your writing?

A few years or so ago, I heard a news story about a British ship that had been discovered underwater in the Canadian Arctic. It had gone missing, as had all its crew, and no one had ever discovered what truly happened. I thought at the time that this would make an amazing story and made a note about it in my notebook. I was flipping through that notebook at the same time as the TV programme The Terror came to the BBC earlier this year. This was the same story: two British ships that had left in 1845 to find the Northwest Passage and had disappeared.

I watched the programme (based on Dan Simmons’ book of the same name) and became utterly enthralled with the story, the Arctic, everything. I’ve spent the last six months reading anything and everything about Arctic expeditions, biographies of Lady Jane Franklin, Sten Nadolny’s The Discovery of Slowness (a fictionalised story of Sir John Franklin’s life, based on real life), supernatural Arctic stories – you name it, I’ve read it! I think the next story will be about this ill-fated expedition but I feel that it’s going to focus on the women. Needless to say, it will be supernatural.

And finally, just for fun, which song would you recommend as a soundtrack for The Haunting of Lindy Pennyworth?

I always write away from music, so this is hard. I feel perhaps the album that sums up Lindy and her progression in the book would have to be Alanis Morrisette’s sublime Jagged Little Pill. It’s full of rage, tenderness, vulnerability, and sarcasm and that’s Lindy all over.

Thank you so much for your answers Sam!