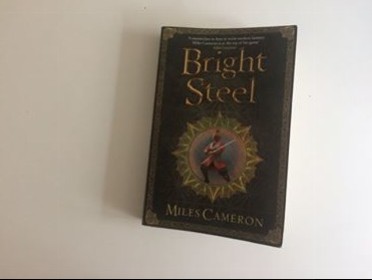 This book was sent to me by the publishers in exchange for an honest review. This in no way affects my opinion of the book!

This is clearly the summer of bad-ass sequels, especially when it comes to Gollancz’s fantasy series. I had a fab update to The God Fragments Series by Tom Lloyd, I have the next Blackwing book patiently waiting for me and then I was lucky enough to pick up Bright Steel, book three of Masters & Mages by Miles Cameron.

Since this is part of a series, it will be hard to discuss this in a completely spoiler free manner so if you don’t want to know what has happened in this series, feel free to click off this post and return to it a little later. I won’t mind.

Now, on to the book itself.

Things have been heating up for Aranthur, a student turned soldier in a battle he never anticipated. Somehow the young man has found himself desperately trying to close the hole in the sky and stop the world around him from ending. It’s not simple however, and Aranthur and his friends that their fight extends far beyond the battlefield. There’s magic, politics and even a public health crisis to deal with. They have very little time to gather their strength, resources and allies – new and old – in order to prepare for the most brutal fight of their lives.

You can really tell that Miles Cameron has upped the stakes with Bright Steel, resulting in fast paced tension that is almost addictive. So much happens in this book and you really get a constant feel of how much is being risked in the dangerous games being played. I’m not sure I would have been able to cope quite so well when everything seems determined to go so very, very wrong. It is a testament to how much Aranthur has grown that he is able to!

Aranthur is no longer just a farm boy, or just a student. He is a strong, and just character who questions the things he has to do in the name of ‘good’ all through the book. Watching his moral dilemmas throughout Bright Steel was really interesting for me and certainly took this from mindless action to something richer. It was almost philosophical and is one of the reasons why I love the Masters & Mages series so much.

The cast of characters around Aranthur are also fascinating to me and show just how well thought out Bright Steel is. Miles Cameron weaves so many threads together in this and you really find yourself cheering for this rag-tag collection of people who have decided to change the world. They’re far from perfect but they’re trying and I love them for it.

So, if you want action, a quick pace and a moral crisis or three, pick up Bright Steel. It is a stunning addition to an already wonderful series.