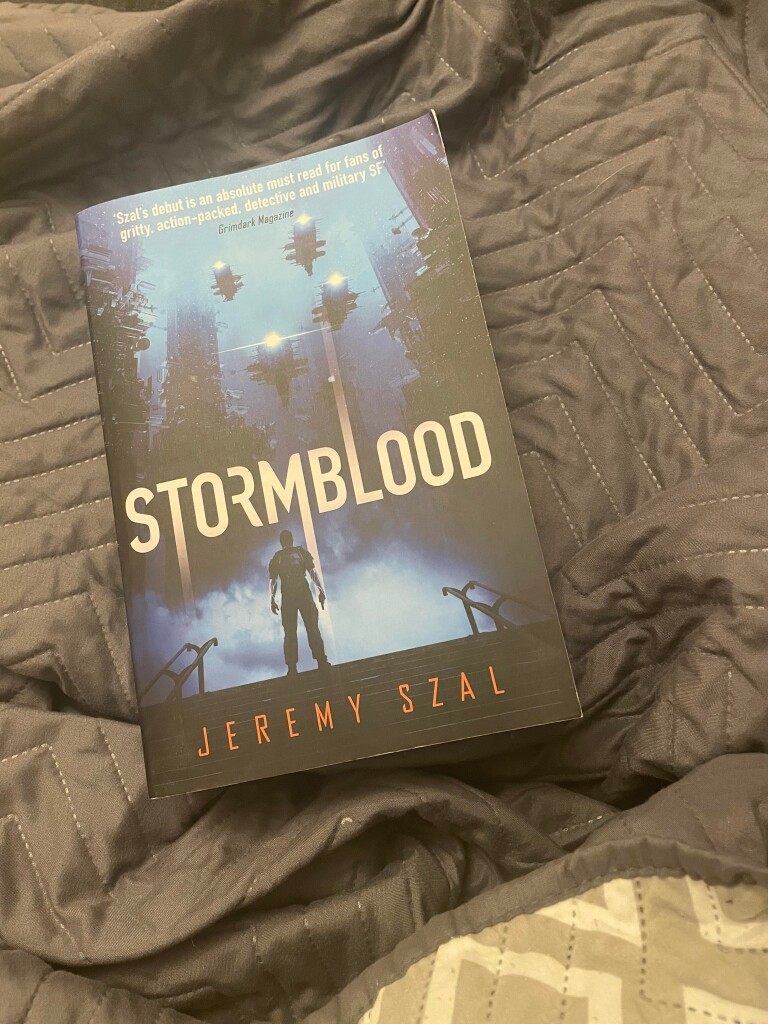 I was sent a copy of Stormblood from the publishers in exchange for my honest review. This in no way affects my opinions on the book.

Now, I won’t lie that did intimidate me for a little while and this poor book has been sitting on my TBR shelf for a while. However, I finally picked up the courage to dive in and I am so glad I did. This is such a vivid science fiction story with a LOT of action packed into its pages.

Stormblood tells the story of Vakov Fukasawa, a former soldier. The twist? He was injected with the DNA of an extinct alien race to make him the ultimate soldier. And now, his colleagues are mysteriously showing up dead and Vakov is being dragged back into a war he thought he had left far, far behind him. He must re-enter the world he thought he had moved on from to figure who – or what – his taken out the soldiers he fought side by side with.

What follows is a fast-paced and intense race through space as Vakov tackles alien technology, renegades and old faces from his past. I can not praise Szal enough for his wonderful world building here. It is completely immersive and engaging from page one. He had thought of every detail to make this alien world addictive and believable. His descriptions were brilliantly crafted so that you truly felt you were right there with Vakov as he unpeeled the layers of secrets that is seemingly lurking around every corner.

There is so much to unpack here that is difficult to do without giving any spoilers so I apologise for the sparseness. Just know that all those details and all that thought from Szal means that there is plenty waiting in the shadows to be discovered by Vakov and readers alike. There is so much packed into this book that everything is a clue and you won’t want to miss a single detail…

It is worth mentioning however that these details mean you need to fully immerse yourself in it. You’ll want to read this quickly and you really should.

Clear some space in your diary and dive in to a fast paced, gritty science fiction about family, fighting and figuring out what actually matters. Just be prepared for some grizzly deaths and violence along the way – consider yourself warned and, hopefully, intrigued!