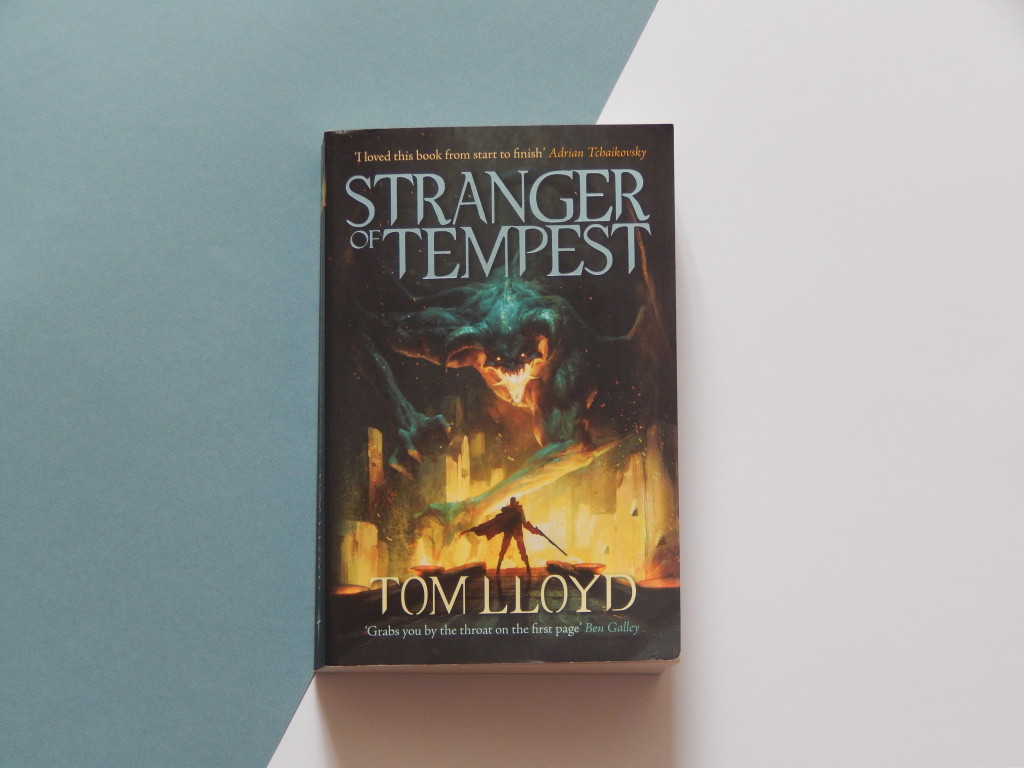 Aaaaand my fantasy kick continues! You may have noticed that I mentioned Tom Lloyd in this post and that I really wanted to read some of his work. Luckily for me, the lovely people at Gollancz were kind enough to send me a copy of Stranger of Tempest*, the first book in Tom Lloyd’s The God Fragments series.

Stranger of Tempest focuses on Lynx, a mercenary with an unhappy past. Down on his luck and looking for work, Lynx signs up for what should have been a simple rescue missions. Things aren’t that simple. With each new turn, things get far more dangerous for Lynx and his new colleagues. Set in a world of magic and hidden secrets, Stranger of Tempest was an adventure fantasy at its most cutthroat.

A large part of this is due to the cast of characters, many of whom are torn between survival and doing what is right. These aren’t straightforward characters, honest or good. They’re characters who must react to what’s in front of them and who keep to their own code, whether or not others approve of it. After all, they’re a band of mercenaries and unlikely heroes. I absolutely loved the collection of characters that could be found throughout Stranger of Tempest, their strange friendships and their travels. It made for an entertaining adventure, where every plan somehow went askew and often ended in a pub.

The mercenaries also carried something called a mage-gun, a modified weapon that allowed people to utilise magic even if they didn’t have any of their own. It was an interesting take on the idea of magical weapons and one that I found intriguing. I’m hoping it will be expanded later in the series.

There is also plenty of history tucked away in the pages of Stranger of Tempest. The mysterious ruined society that haunts both the characters and physical landscape of the novel also firmly grasped my attention. Part of me hopes for answers in the next book but I also love the intrigue and secrecy! It certainly adds a brilliant layer to an already exciting fantasy.

P.S I received a free copy of this book from the publisher but it in no way affects my opinion. If you want to pick up your own copy, you can find it here (this is an affiliate link)

One thought on “REVIEW: Stranger of Tempest”