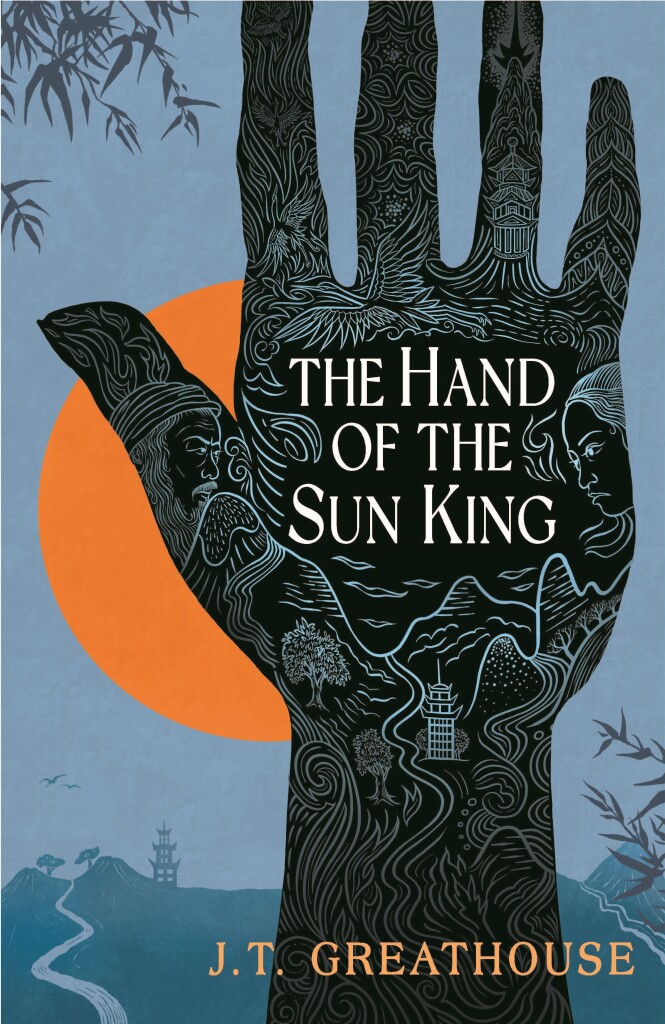 Today I am welcoming J.T Greathouse to the blog to discuss his new book The Hand of the Sun King. I can’t wait to find out all about his new fantasy novel! Let’s dive right in! 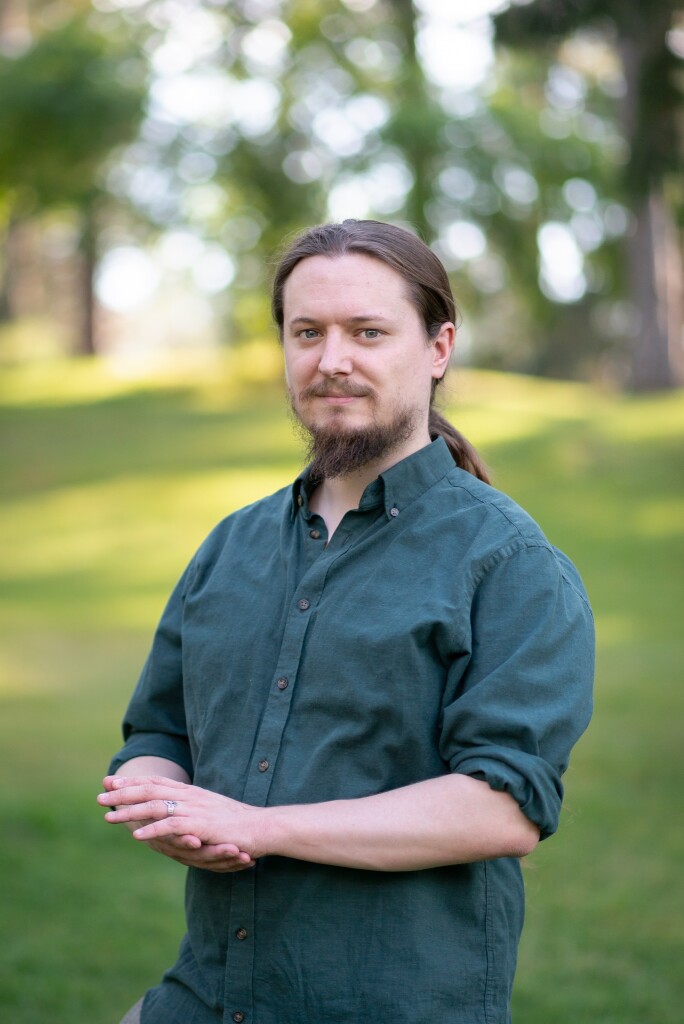 Hello and welcome to This Northern Gal! Would you like to start by introducing yourself?

Hi! Thanks for having me! I’m J.T. Greathouse, a fantasy writer from Washington State. I’ve had short fiction published all over the place, mostly in Beneath Ceaseless Skies magazine, and my first novel, THE HAND OF THE SUN KING, has just come out from Gollancz!

I’m also a high school English teacher and a part-time bookseller at my local independent bookstore. Before all that, I studied history and philosophy and earned a Masters in Teaching at university, and spent about a year and half altogether living, studying, and working in Taiwan and China. When I’m not writing or working, and other than the obvious writerly hobby of reading, I love watching movies (particularly weirder art-house stuff, THE GREEN KNIGHT was a recent favorite) and playing video games (I recently got back into Final Fantasy XIV, which was perhaps a mistake, considering I owe Gollancz two more books…)

And we’re here today to talk about your new release ‘The Hand of the Sun King’. Which three words would you use to describe this book?

In all seriousness, I find it really challenging to summarize anything I’ve written. Writing the query letter for THE HAND OF THE SUN KING was torture, and writing the synopsis for when my agent submitted the book to publishers was even worse. Whatever three words I pick, I’ll inevitably feel like they don’t do enough to capture the book. But there are a few very nice words that keep popping up in reviews! Vivid, fascinating, and stunning are all pretty good ones.

They sound like very good choices to me! This is the first book in a new series. What can we expect from the rest of the series?

THE HAND OF THE SUN KING explores questions of how we form our identities and our sense of right and wrong despite the pressures placed on us by our cultural and political context, but that isn’t really the end of the story, is it? Once you’ve chosen a path, you have to follow it, and that brings its own challenges. As the series goes on, we will continue to follow our protagonist, Wen Alder, as he tries to change the world for the better. But of course, you can’t always predict how people will react to your actions, or what the unintended consequences of your actions will be, and as the stakes continue to rise those unintended consequences ripple out, affecting more and more people. We will also follow a few other characters, most of whom appeared as secondary characters in THE HAND OF THE SUN KING, as we see the Empire and the impact of Wen Alder’s actions through their eyes.

I can’t wait for that! What were your inspirations for this fantasy?

Two of my favorite novels are WAR & PEACE and A WIZARD OF EARTHSEA. Both feature characters who struggle with arrogance and ambition, who make mistakes and learn from them, and I wanted to write a story that featured that same kind of progression. The setting of the book, as well as some elements of the magic system, were inspired by my study of Chinese history and philosophy at university, as well as my time living in China and Taiwan. The system of imperial examinations and hierarchy draws on similar systems in the Ming and Qing dynasties, for example, and much of the aesthetic culture of the Sienese Empire is based on the Ming and Qing dynasties as well. The island of Nayen itself, where much of the novel takes place, is based largely on Taiwan, geographically, though its culture draws on a broader blend of inspirations.

Gardens feature prominently in the novel, both as settings and as symbols, which was partly inspired by the extremely good Qing dynasty novel “The Dream of the Red Chamber” (also sometimes titled in English “The Story of the Stone”) which takes place primarily in one vast, elaborate garden in which almost every component is symbolically representative of some thematic idea.

The magic system was partly inspired by AVATAR: THE LAST AIRBENDER, partly inspired by Daoism, and partly inspired by various postmodern ideas about how our ways of conceiving of the world and interacting with it are shaped by forces beyond us, such as our cultural and political environment, what is permissible or allowed within the discourse going on in our cultural and political context, and even the basic limitations of our senses. I don’t want to say too much about how these three different things interact in the novel, partly because the fun of reading the book is learning about the magic system, and partly because there are layers to the magic which won’t be revealed until the second and third books.

Well it certainly sounds fascinating! Your protagonist is a foolish young boy. What was your favourite thing about writing him?

Wen Alder is a lot like I was as a teenager — very booksmart, but also very emotionally stunted, socially awkward, and not very good at understanding the broader context of his actions. It’s always fun to write characters who are overconfident, but what was particularly fun about Wen Alder was the dissonance between his obvious intelligence and the absolutely bone-headed decisions he makes when he lets ambition, arrogance, or self-absorbed cleverness override good sense. Contriving situations that would take him down a peg or two was a lot of fun, but writing his reaction to those moments and his gradual growth into a more humble, more cautious, more thoughtful person was even more so.

Intriguing…What do you reckon Wen’s coffee order would be?

His order would depend a lot on who he was with (considering his identity tends to fluctuate based on who he’s around). If he was hanging out in a Sienese garden with fellow scholars or sorcerers, he would probably order something sophisticated–he would keep up with trends and order whatever the “right” way of drinking coffee was at the time. A cappuccino, maybe, or light-roasted black coffee made in a chemex. If he was hanging out with the windcallers in An-Zabat, he would probably drink Turkish coffee, because that’s probably the way the An-Zabati make theirs. But if he were to just wander into a coffee shop on his own, without anyone watching, he would probably order a mocha. Then again, he might want to impress the barista…

You predominantly write fantasy and science fiction – what draws you to these genres?

That’s a tough question to answer, for me, because I’ve been reading and writing SFF since I was an actual child. I was always interested in history (we had a copy of Stephen Biesty’s “Cross-Sections Castle” picture book when I was a kid, which I read until the spine started to disintegrate), and that gradually developed into falling in love with fantasy, particularly the Redwall books by Brian Jacques (one of the first things I can remember writing, actually, was a mashup between Redwall and a James Bond movie my dad was watching, in which James Bond was a mouse with a gun that shot sunflower seeds) and then, of course, The Hobbit, the Chronicles of Narnia, and so on.

I came to Science Fiction by way of Star Trek: The Next Generation, which my parents watched regularly when I was a kid, and then by way of the Animorphs books, of which the local library had a complete collection. So in large part what draws me to these genres is habituation, but I’ve also tried writing other genres and I’m just not as good at it, or as interested in it. There’s something really compelling about designing a secondary world, and a certain thematic depth that can only really be reached by doing so, I feel. But also wizards and dragons and space ships sure are cool, aren’t they?

They certainly are! I wonder what would happen if you combined all three…Tell us a little bit about your writing process? Do you have a set writing space? A playlist? Any strange habits?

I tend to write at my desk at home, though when I get stuck I find that moving to a coffee shop or the library can be a good way to shake things loose. I’m not sure why that is, exactly.

I do tend to listen to music while I write, but not when I’m revising and polishing, and though I don’t put together playlists certain albums become associated with a book, just because they were what I enjoyed listening to while working on it. For THE HAND OF THE SUN KING, that list of albums includes Bjork’s “Utopia,” Polyphia’s “New Levels New Devils,” Heilung’s “Lifa,” Tool’s “Lateralus” and “10,000 Days,” and Florence and the Machine’s “Ceremonials,” as well as a few hours-long playlists of classical Chinese music on YouTube.

As far as strange habits, the only one I can think of is my tendency to write in short bursts, usually about fifteen to thirty minutes at a time, interspersed with five to ten minute breaks while I do something else and let my subconscious mull over what I’ve been working on.

Well, if it works, it works! What’s next for you?

Book promotion! But meanwhile, I’m working on polishing up the second book in the Pact and Pattern series, which has a tentative, unofficial title that I’m not yet sharing with anyone but my agent, editor, and beta readers, haha. The story for book 2 is largely done, but it still needs some strengthening. Once that’s finished, it’s on to book 3, and then I’ve got a few ideas for things I’d like to work on next. We’ll have to wait and see what catches my fancy and/or what my agent thinks he can sell when the time comes!

And finally, if you could recommend one book that you haven’t written to sci fi and fantasy fans, what would it be?

Only one?!?! Well, I’ve already mentioned A WIZARD OF EARTHSEA, so I’ll go for something else. A recent sci-fi novel that I really loved and which I feel hasn’t been getting as much attention as it deserves was THE VANISHED BIRDS by Simon Jimenez. It came out last year and was the author’s debut novel, which was sort of hard to believe given how absolutely stunning and gorgeous it was. It captures its thematic ideas about colonialism and parasitic capitalism with a profound depth and richness, and the prose is just beautiful.

It sounds like an amazing book! Thank you so much for joining me and good luck with the book promotion!