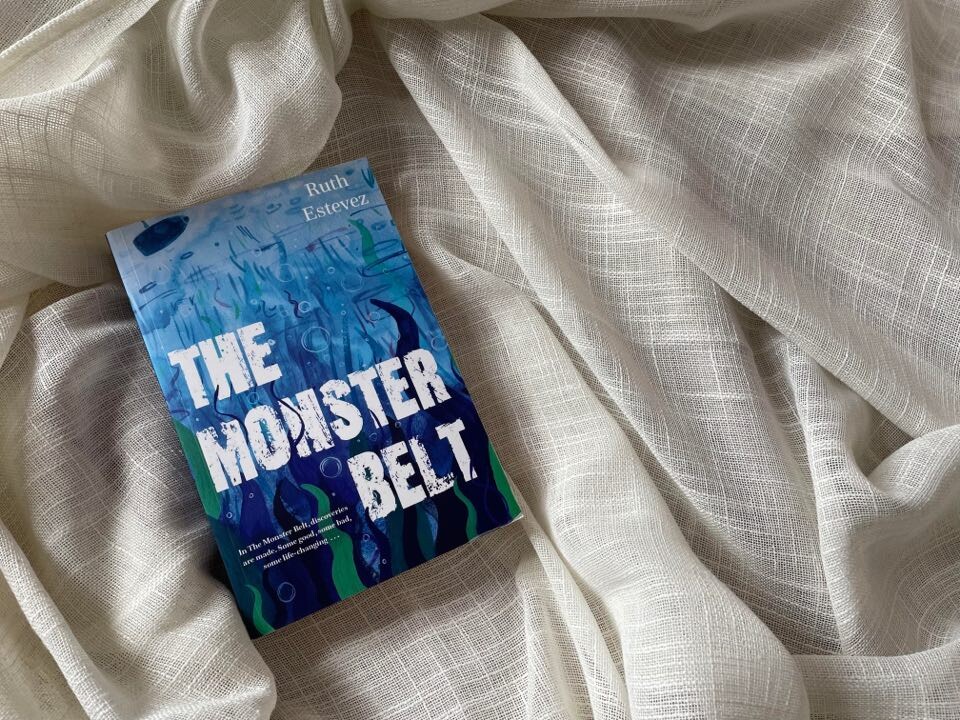 I’m so excited for today’s post. To celebrate the release of The Monster Belt, I got the opportunity to chat to the author, Ruth Estevez. We got the chance to discuss writing processes, influences and what you need to do to survive a visit to the monster belt yourself…

In the interest of full disclosure, I received a copy of The Monster Belt from UClan publishing but this was not as part of this interview and in no way influences my opinions on the text or the author itself.

Shall we get started?

Hello and welcome to This Northern Gal Ruth! Would you like to introduce yourself?

Hello Kelly, and thank you for inviting me onto your site and asking me questions. I’m Ruth Estevez, the author of The Monster Belt, Jiddy Vardy and Erosion, all three of which are set, or part set in Yorkshire, which is where I’m from.

I’m also the Project Coordinator of a young people’s reading and writing competition, The Portico Sadie Massey Awards, at the Portico Library in Manchester, where I live.

My background is in theatre and television, working in stage management, acting,  driving the tour bus to writing. I’ve toured all over North Yorkshire with a theatre in education company, made props at Opera North, headed for a season at Pitlochry Festival Theatre and written scripts for Bob the Builder, before settling down to writing books.

Yorkshire Tea is the best tea. What can you tell us about The Monster Belt?

I’d say read the back cover blurb, it sums it up far better than I can! But I’ll try….

The Monster Belt is a mystery about how a boy dies in paradise. It’s about how a 17 year old escapes the labels she has been given since birth. It’s questioning what the term ‘monster’ means and deciding whether mythical creatures really do exist or if they’re manifestations of our emotions. It’s a step by step guide on how to recognise if someone is drowning. It’s an unexpected love story. And it’s also an adventure.

As one reviewer said, it’s ‘Beautiful, bold and scary.’

That’s high praise indeed! What was your favourite part of writing this book?

My favourite part of  writing the The Monster Belt was when Ruby, Harris’s sister emerged. It was a ‘eureka’ moment and I love those. I also loved researching mythical creatures and weaving them into the story and describing both the locations in the book, Yorkshire and Formentera, Both of these hold a special place in my heart and to bring them alive by writing about them has been such a pleasure.

Let’s flip this: what was the most challenging?

The most challenging part to write was the timeline. The book has been through so many versions from when the initial idea came into my head, that I had to keep checking this one. I used timeline maps – seeing them visually are good for these problems – but I was a bit paranoid about it by the end.

I would need something to keep checking too! What was your writing process like? Do you have any habits you have to do?

I don’t have any writing rituals, like using a certain chair, time of day, or pen but I do like a quiet house! I live in Manchester and it can be noisy with building work going on around the street, car doors slamming, school time! So, I do dream about a writing habit I’d love, which would be, to sit facing a window with a lovely view of either the sea, or the Yorkshire Dales. This type of writing habit would have a dual purpose of inspiration for any descriptive passages on place and peace to concentrate. Maybe one day!

I’ll cross my fingers for you! Did your background in theatre and television influence the writing of The Monster Belt?

Have you been reading up on me?! I’m impressed.

My career, first in theatre and then television has influenced my work, yes. In fact, The Monster Belt started as a stage play and I loved imagining and working out the set! And my very first novel started as a screenplay.

Both are collaborative mediums and not the easiest for a new, unknown writer to get produced so my agent at the time suggested I turn the screenplay into a book. This was also a ploy to keep me busy, but that is a whole other story. The main point that came out of this, was that I had to work hard at adapting from writing scripts to prose. I couldn’t only rely on the visuals and dialogue to show where the characters were and what they were doing, I had to describe it all in prose. Massive difference! But, once I was on that wavelength, I was hooked.

This first book, Meeting Coty (about perfume) came out half way between the two, but is very special to me because of that. It is out of print now as the publisher passed away, but it is being re-edited and released next year. However, novel writing hooked me.

Working in stage management on TV’s Emmerdale, and then writing scripts for children’s TV’s Bob the Builder taught me about dialogue and speaking it aloud to see if it works, which I always do and my love of film helps me appreciate visuals and concentrating on description to show the landscape.

I believe everything we do or have done in our careers can influence us as writers, and theatre and TV definitely help me in my writing today.

I love that! And I love that trick of reading dialogue aloud – I might have to try that. Back to your book:  The Monster Belt sounds like an intriguing place. What inspired it?

I often get ideas from photographs, articles, snippets of something I’ve read and this was the same for The Monster Belt. I was flicking through the pages of The Readers Digest – Book of Strange Stories and Amazing Facts, when I came across a paragraph about an area between two latitudes in the Northern Hemisphere where the majority of mythical creatures are found. It is called The Monster Belt, or the Monster Latitudes. I am fascinated by mythical creatures, and very much on the Loch Ness Monster (I don’t want anyone to find Nessie) so I wanted to run with this idea of the belt containing all these creatures.

How do you think you would cope if you had to visit there?

Probably not very well! I hope I’d behave as Dee does when she sees the Squonk, but I doubt it somehow! I’d be fascinated and terrified at the same time. I think I’d want to keep my distance and observe and I’d be highly tempted to take photographs, but I’d also want to leave creatures alone and give them their privacy. If I’m wandering into their space, then I should respect that. I wouldn’t want them trapped or captured, so I’d hide the photos if I took any and keep any mythical creatures in my fiction, retracing my steps.

If however, I encountered any creatures that wanted to take a bite out of me, I’d put my old climbing skills to good use and get out of there.

It sounds like you have quite the plan. If you had to give three pieces of advice to anyone visiting The Monster Belt, what would you tell them?

Point taken! What’s next for you?

I’m going to be travelling to my favourite bookshops in Yorkshire and signing copies of The Monster Belt. Then I’ll be on a repeat of that in November, signing copies of Jiddy Vardy – High Tide and in Robin Hood’s Bay for their Victorian weekend on the 4th of December to talk about my smuggling books that are set there. The sequel to Jiddy Vardy, Jiddy Vardy – High Tide is out on the 11th of November so I’ll be promoting that.

Hopefully I can crack on with the third book in the trilogy to be published at the end of next year.

Also, I have many discarded scenes from The Monster Belt that I want to use, so I may start another Monster Belt book! And I need to check in on Harris and Dee and see how they’re doing. They’ve both made life changing choices and I need to see if they are working out for them. And if I do this, maybe someone on Formentera will let me have a little house for a couple of months so I can really soak up the atmosphere to do complete justice to the island!

Plus, I’m desperate to finish a ghost story I’ve started. I love ghost stories and I want to write a spine tingler. That one is set in Yorkshire.

Wow! That sounds like it will keep you busy! Thank you for taking the time to talk to me today.

Thank you Kelly for all these questions and making me think!

And that’s a wrap! Don’t forget to check out The Monster Belt for yourself…