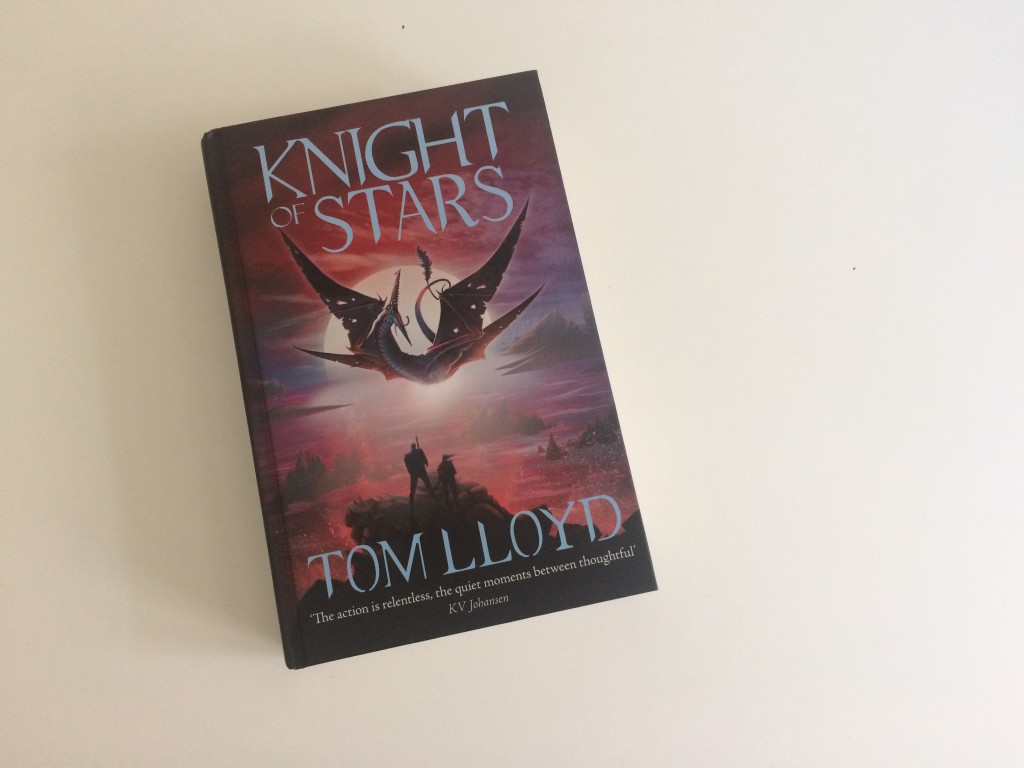 This book was kindly sent to me by the publishers in exchange for my honest review. This in no way influences my opinion on the book itself.

Knight of Stars is the latest installment of The God Fragments, an exciting and fast-paced series from Tom Lloyd. It is the third book so it will be difficult to ignore spoilers in this review – if you haven’t read the first two books and want their secrets to remain hidden, turn away now. I won’t be mad, I promise.

If you need a reminder of my love for this series, you can find my reviews for Stranger of Tempest (book one) and Princess of Blood (book two) by clicking on the titles. I love this series and Knight of Stars is no exception. In fact, I think that the series simply goes from strength to strength with every book that joins it. I know it will be a series that I will be keeping up with for as long as Tom Lloyd keeps writing books of such outstanding quality.

Fresh on the back of their vicious and death-defying adventures, Lynx and his fellow mercenaries have travelled on to the Mage Islands. While at first it may seem that it is a bit of a breather for this brutal bunch, it is never that simple when the Cards are travelling. It is not long before they found themselves caught up in the volatile politics of the area and the dangerous magic that seems to be lurking in every cliff face. Most worryingly of all, these are not the kind of problems that require the Cards usual shoot-first-and-get-drunk-later approach. They find themselves trying to be diplomatic and to deal with issues far beyond their scope.

What I love about this series is that it is expanding with every book. In Knight of Stars, we got to see more of the world and magic system that has so carefully been constructed by Lloyd. This was fascinating for me and a real peek behind the curtain at the universe that has been made. I can’t wait to see what happens next as the magical stakes keep rising.

You may also remember from my previous reviews that I love the characters in these books and that love only deepened with Knight of Stars. We got to get to know some of the other characters really well and see more of their history which was so fun! I still love Lynx and he might be my favourite reluctant hero ever but it is still fun to get to know the mercenaries around him too. They’re certainly a funny bunch  – if dark humour is your thing – but in Knight of Stars you see the more genuine side too.

Tom Lloyd brilliantly balanced this new, emotional side with the fast-paced and brutal action to create a masterful story that I will be throwing at many of my friends with the insistence that they just hurry up and read it.